This web site uses cookies to deliver its users personalized dynamic content. You are hereby informed that cookies are necessary for the web site's functioning and that by continuing to use this web sites, cookies will be used in cooperation with your Web browser.
I agree
Login
HrvatskihrEnglishen

The Institute of Electrical and Electronic Engneers is present in Croatia since 1971, although an independent IEEE Croatia Section exists since 1992.

When Yugoslavia fell to pieces and new states have been established, the question was what to do with the Yugoslav Section. In 1992 the Regional Director Kurt Richter invited the Chair of the Yugoslav Section Baldomir Zajc from Ljubljana and the two members of the Section Committee, George Paunovic from Belgrade and Aleksandar Szabo from Zagreb to Graz, Austria. The unanimous conclusion of that meeting in Graz was that the Yugoslav Section cannot practically exist anymore, and that new sections in new countries having enough members should be established. So in Slovenia, Croatia and the remainder of Yugoslavia new petitions have been signed by members, and in 1992 new Sections, the successors of the former Yugoslav Section have been established: the Slovenia Section, the Croatia Section and the Yugoslavia Section. IEEE recognised all the years we spent together in the former Yugoslav Section as years of our existence as well. So in Helsinki at the IEEE Region 8 Committee Meeting in 1996 we received the banner for the 25 years anniversary of existence.

The membership in our Section has a steady increase. At the end of December 2009 the number of members came up to 738.

The first Section Chapters have been established in 1997 and in 2012 the number of Chapters came up to 22. 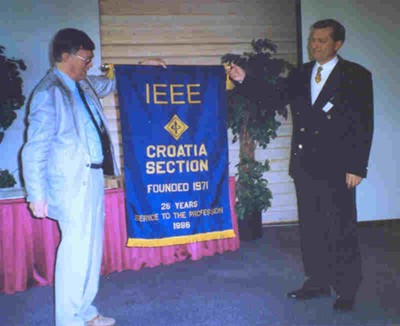